I asked the lady who I had watched, walking slowly up the sidewalk in front of me.  She was balancing a large bin on her head.  This seemed unusual.  I saw a lot of this in other parts of the world, but not here in London.

She was older, and wearing a navy uniform of sorts, carrying a purse and wearing a backpack in addition to the large bin she had now rested temporarily on a letter box.

It was after 9:00pm on a Friday night.  The rains from earlier in the day left the sidewalk reflective in the streetlights, a carpet of leaves growing here and there as November had arrived.  Guy Fawkes was already being celebrated, as an incongruous moon peered down upon some distant fireworks.

“Oh no, it is quite light.  Can I give you some of this windfall?” she asked with a heavy accent.

In the bin were a a pile of light-colored flowers – large flowers, all bunched together.

“Do you have a lady who would like some of these flowers?”

Still wearing the backpack, she now set the bin down on the ground.  I was fascinated.  I said, “Yes I do, but she is all the way in the United States!”  I thought this might throw her off, but she replied:  “Well then perhaps you have a neighbor, or a sister or someone?  It is a shame to just pitch them out..”

I agreed to take some, and upon doing so, she handed me these tremendous blooms – just one stalk of pale, paper-thin petals.

But that was not all.

“You must have some ivy.  Come, would it trouble you to go just down Victoria Rise?”  I had a moment’s pause, but then said “of course – can I carry the box?”  She again said, no, that it was light.  And she moved deftly across the street to the corner and down the block.  Along a wall she stopped, put the box down, and peered up an overgrown wall that must have been 10 feet high.

“This is it.  Can you see if the leaves will do?  My eyes are not very good.  I have some scissors…”  Remarkably, she produced a pair of scissors, donned a cloudy pair of glasses, and reached up and began rapidly clipping off strands of the cascading  ivy.

Her name was Lucy.  She worked at a local software development office a few blocks away.  She is a part-time guard there.  I asked where she was from.

I said I had been to Italy.  She asked where.  The first city I could recall, and from my last trip.

Lucy. “Just north of there.”

Me.  “WHY would you ever leave THERE?”

Lucy.  “I am surrounded by mountains, the snow in the winters… there is not much to do.”

I graciously accepted the bunch of ivy she handed me.  She put her scissors and glasses away.  Again I offered to help her with her load.  Again she refused. 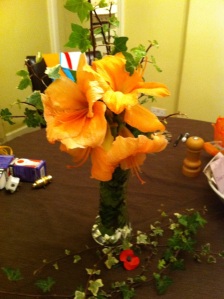 “I will go home now – I live just there – I will go home, and have a cigarette with my neighbor.  It is nice to see a man who would stop to help a woman.”

I did not know what to say.

This entry was posted in Ramblings and tagged amaryllis, flowers, ivy, Lucy. Bookmark the permalink.