We are a connected people.

Years ago, the telephone was a feared technology.  Imagine the heated debates in the business boardrooms – What in the world will happen if we allow people to have them?  Why, they could call anybody, and say anything!!

By and large, people didn’t, although I feel sure that some fraction of the general population for whom the house or work phone was a new tech did transgress lines of propriety.  Technology is just a set of tools; what we choose to do with them is on us.

And I remember in the 70’s as a young teen, vying for time on the home phone to call that particular friend.  We had agreed at school on the specific time – it had to be within a particular window because there was dinner time, chores, homework, etc. and there was only one phone in a house of seven people.

Once on the phone, we would stay on for as long as we possibly could, seeking whatever privacy could be afforded by the length of the cord.  And, yes, some unkind things were said, as young teens will often do.  That telephone technology, though, allowed us to talk intimately about things that were going on in our lives, and in our friend’s lives.  It became an essential channel for connection when we were not together at school, or church, or whatever.

Later, as a nineteen year old on a year abroad in France, that same technology was the only

Me on my way to a year in France – pre-Internet or cellphones!

means of live communication with my parents.  It was expensive, making an international call, so I only did it very occasionally, and always after having arranged weeks ahead of time when that call would be.  ‘Very occasionally’, by the way, means that I only had maybe 4 or 5 phone calls with the US during my entire year. The other means of communication was the postal service, and, if they weren’t on strike in France, the most expedient service still required about 10 – 14 days before receipt of a letter.

And so, on either the house phone of the family where I lived (with ZERO privacy) or at a booth at the local Postes Téléphones Télégraphique (PTT) office, I’d dial a million numbers and wait for the connection, hear a crackly voice on the other end, and dive into a rushed conversation trying to get as many details in as I could in the minutes I had purchased.  Sometimes the connection was amazingly clear, and someone would inevitably say “Wow! It sounds like you are right next door!”

Those were vital moments, though, reconnecting over great distance through technology.

I once observed a public phone in Paris that had a long line of obviously foreign people standing and waiting turns.  That was a clear sign that something had broken on the phone, and that it was basically open for service to any number you’d care to dial.  I waited in line behind I think a Russian man.  Given the fortuitousness of the situation, I did not have anyone prepared to receive my call back in the States, so I just took a chance on my best friend.

When the Russian finally hung up, I dialed the many numbers to get to my friend.  (Remember when you had to remember phone numbers?)  It eventually rang.  He picked up.

Communications technologies today abound.  The sheer number of apps available on portable devices has very nearly made the conventional telephone obsolete.  And with wireless services, we are free to connect just about wherever we are, and whenever we wish.   My sons have never known a world without mobile phones.  They have had their own since they were teenagers.  And they’ve had access to computers and all the good and bad that the Internet provides.

Let’s look at the good power of the mobile phone, coupled with the Internet.

Think about this:  If you know the mobile number of a phone anywhere in the world, and if you have a Skype account, you can call that number from your computer for just pennies per minute.  Say, for example, you happen to have the number for a person in Cambodia, or Rwanda, or Columbia you can, in the comfort of your home (or at a local coffee shop for that matter) call them up.

Think about this, too:  If you have a Skype conversation going, you can use other Internet-based technology to broadcast your conversation to a particular channel on the web.  Kind of like having your own personal radio station.  Other people on computers wherever they are in the world could ‘dial in’ to your channel, and hear your conversation with that faraway person.  And all that faraway person needs is a basic cell phone.  And suddenly, they can be heard by many people.  Indeed, a LOT of people.

And finally:  If you have this conversation happening, and you’ve let the Internet-going listeners know when you are going to have it, suddenly you have a live, web-broadcasted conversation with someone very far away from you (and perhaps from most of your audience), AND your audience can use a chat tool to tell you what questions THEY have for the person on the other end of the line.  A one-to-one conversation suddenly becomes a facilitated one-to-many conversation. 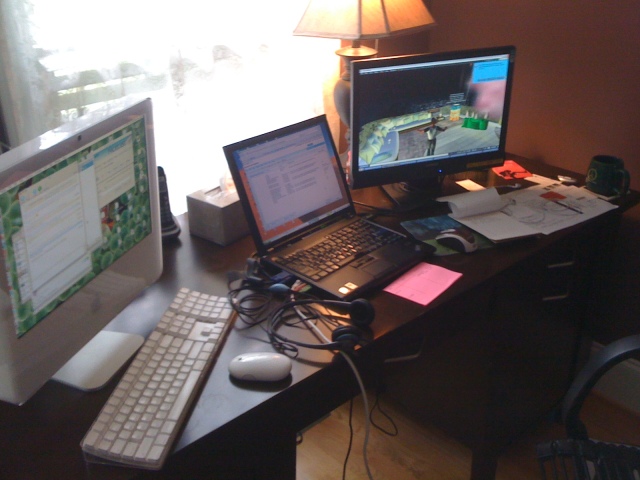 The ‘digital cockpit’ in my house, and the locations of individuals / organizations I ended up connecting with for non-profit work.

Everyone is learning.  Human distance disappears.   Everyone feels connected.

What if we really are all ‘right next door’?  Would that change how we feel about people that are far away, geographically?

This is the promise of new communications technologies, to bring us closer as humans who happen to live at great distance from each other.  We feel connected to them, and empathize with them.  Just as I felt my friend’s anguish over middle-school drama back in the 70’s, so we feel our fellow human’s joys and sorrows.

The good power of text messaging.

In the late 90’s there were a few chat clients that came out.  Being a person interested in new communications technologies and education, I was (and am) always trying new things.  I downloaded the AOL Instant Messenger client and created an account.

At the time, you could just see whoever was online – anyone, anywhere.  I remember randomly choosing someone I saw that had an interesting name.   I think I just said ‘Hello!’.   I remember now the nervous giddiness that ensued, waiting to see if I’d get a response.

What followed was an exchange of basic information – who we were, what we did for jobs, where we were, etc.  He was Turkish gentleman, employed at a bank there in Istanbul.  I had never, and have never, been to Istanbul.  He had never been to the US.  We chatted for some time.

Over the weeks and months that followed, we would occasionally just say ‘Hi’ to each other, and ask each other about our kids, work, etc.  I had a connection with this guy, and I had never met him.  I cared about his story – his family, his life, his worries, etc.  I didn’t know how much I cared at first.  Not until the earthquake of 1999.

I must’ve heard about it in the news, I’m not sure.  But the first thing I did when I got to work was IM my friend in Istanbul.  No answer.  Several days went by with me checking in.  Finally he answered – he was quick to tell me that he and his family were fine, but that there was some pretty serious local damage.  We had a short exchange about that.  I was relieved to know he was okay.  And I felt special, to be honest, that I had an insight from someone there.

I honestly believe that if I had not made that early, text-only, connection, that the events in Istanbul would have just rushed past me like so many other news items do – just noise in the background that may cause a moment’s superficial concern.  The connection with my friend there was human, not just technical.

I lost touch with that friend in Istanbul – I’m not sure why or how, honestly.  I think my friends list grew and that the technology changed in some ways that I ended up switching to other services.  But that’s okay; to this day, I still think about Turkey and Istanbul in particular, and feel like I know someone there.  And I care about what happens there as a result.

I believe mine is a story shared by many; and as communication technologies continue to develop, we will very likely have more tools at our disposal for connecting with people in meaningful ways. Connecting carries the possibility of care, and that is a very good thing.  And you might agree with me that care (connection, compassion, concern) is something that we can never have enough of.

I invite you to join me (and millions of others) in closing the human distance that would otherwise be there.   Choose your channel.  Reach out.

This entry was posted in Ramblings and tagged distance, inspiration, social media. Bookmark the permalink.