Many of you will have seen Slumdog Millionnaire, that Oscar-winning story of a young boy growing up in the slums of Mumbai, and his fall into fortune. 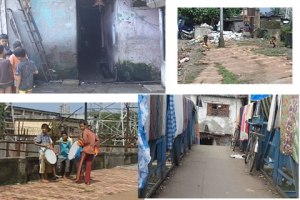 Traveling over to India, I didn’t know that the actual slum where that story took place was here in Mumbai.  I had already planned to go looking for some non-profits or at least get some good source material for future work with an Indian non-profit for Peace Train.  Originally I was going to meet some people and maybe get a guided tour of places, but it turns out that it is Ganesh’s birthday tonight, as well as a Muslim holiday (Id), so all offices were closed.

Well not really.  I had taken the vacation day from work, so I decided to hire a driver and just go there myself.  The driver was a little taken that I didn’t want to go to malls or to see big buildings.  Nope.  Take me to the place where a million people live.

A million.  That’s what the driver estimated.

It’s hard to put words to it.  You drive for miles along the edge of Dharavi, with children half-naked squatting on the sidewalks, people laying down on the concrete, and dark tiny passages that lead between squalid shop-fronts into the slum.  I explained to the driver what I was doing, and he obliged, taking me first to a bridge from which we could look across the maze of blue tarps, tires, bags of trash and corrugated tin that made the roof tops of the dwellings – some several stories high.

We later stopped alongside a causeway.  We got out of the car.  There was a narrow steel bridge that spanned the green water of the causeway into the slum.  I turned on the camera and went over.

Brown eyes, brown faces
Smiles and hurried feet
The boys gathered tentatively
The camera capturing them
Boys full of joy
Bursting with curiosity at the sight
Of the tall white stranger.
This maze of ladders, concrete
Hung laundry and tarps
Broken glass and empty plastic 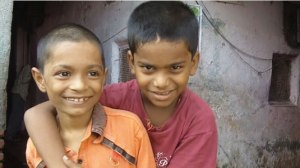 This entry was posted in Ramblings. Bookmark the permalink.

1 Response to The Dharavi slum