I was a stranger in a strange land, as Leon Russell might sing it, but it wasn’t after all that strange. 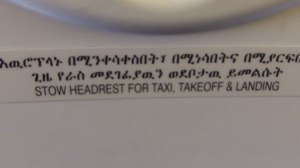 Having grown up in the south of the United States as a white male, the signs that I was indeed THE foreigner were numerous:  I was among a handful of white people on the plane, and I’m pretty sure the only American.   For some, this may seem to be a shallow reflection on the situation, but for me it is one of the ways to really know you are in a new situation – I mean, a really new situation.   Not like discovering that the corner ice cream shop changed hands and is now a coffee house.

Why was I there, in the first place?  I was making a sort of pilgrimage.  More about that in a minute.

I’ll say this –  the people with Ethiopian Airlines were quite helpful.  My plane from Addis to Kigali was delayed because they discovered that the tires were showing too much wear.  It was one of those situations where you see people gesticulating and grumbling (in a number of languages), and wonder if they’d really rather take their chances rumbling down the runway at 150 mph on worn out rubber.

Anyway, I still remember the gate assistant who went out of her way to find out when the plane might leave and arrive in Kigali – I had people waiting for me there; people I had never met, yet felt like I knew well.  My phone battery was running out – I made one last call to let Mariette know I was delayed.

I wandered around the big “O” shape of the terminal, avoiding the smoking Chinese guys who puffed with the zeal of teens testing the bounds of freedom.  I got a coffee in a shop, having finally decided that caffeine would be better than beer at this stage of the game – having hardly slept at all from the time I started this trip at the snowy train station in Skövde, Sweden some 12 hours before.

Why am I here, of all places?  Maybe this wasn’t such a great idea…

This entry was posted in Ramblings. Bookmark the permalink.

1 Response to The smoking Chinese